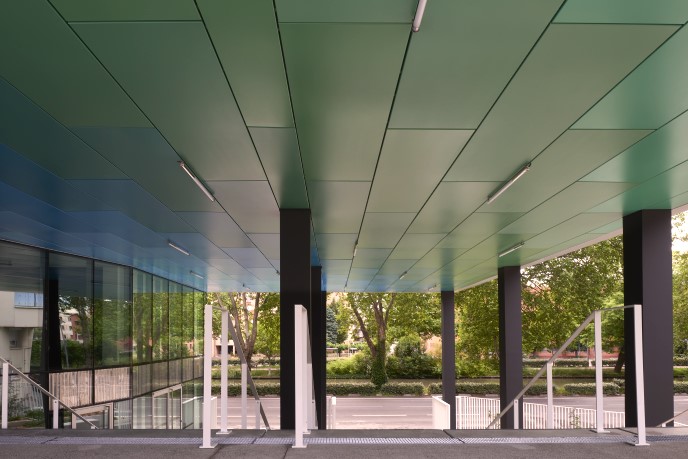 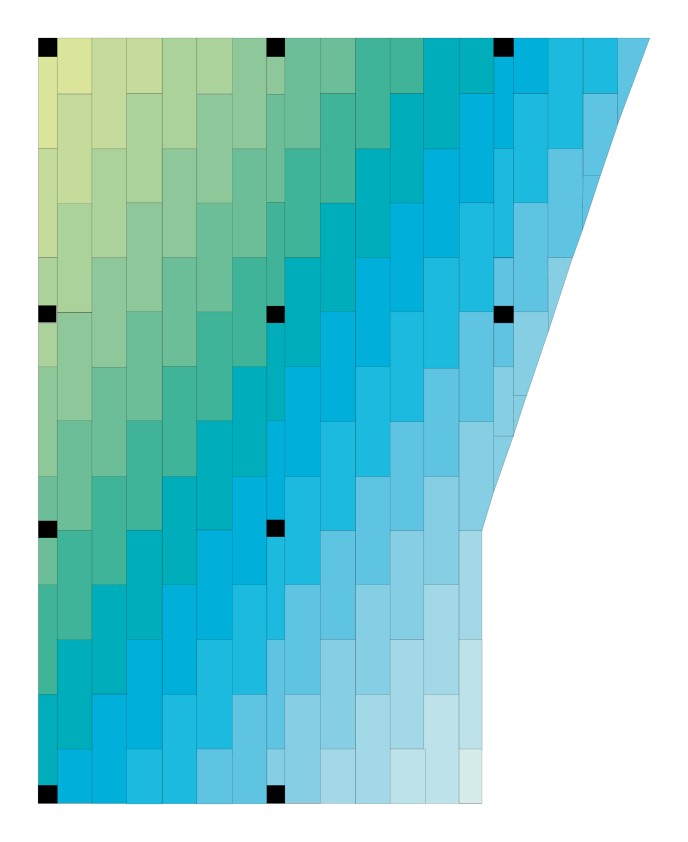 Invited by COVIVIO to design a permanent work for its office building on the banks of the Canal du Midi, Stéphane Dafflon chose to place it on the ceiling of the forecourt that gives access to the building while remaining visible to passers-by on the Boulevard de la Marquette. In this way, his intervention remains public while addressing the building's users. The artist's second decision was to base his composition on the structure offered by the metal cassettes that cover this ceiling. They offered him the design of a grid that allowed him to concentrate his work on the colouring of the ceiling.

Stéphane Dafflon chose green and blue because the landscaping project developed on the terrace and the trees on the quay obviously suggested natural green, while the idea of the water of the canal and the midday sky evoked blue. Hence this composition in gradations, from the lightest to the darkest, from the outside to the inside, along a diagonal that emancipates itself from the orthogonal character of the structure and seems to invite one to climb the stairs to the plateau. The title of this work is also that of a famous jazz piece played by Miles Davis. The reference to music should emphasise the melodic character of this painting, whose tonality ranges from the brightest to the darkest, such as blue, which is also the blues, combined with the vitality of yellow, gives the freshness of green.

Initially created on the screen and then transcribed from the computer to the canvas or wall, Stéphane Dafflon's apparently simple, smooth and perfectly mastered works take on their full meaning once they are inscribed in their environment; they modify the viewer's perception of them, both visually and physically, whether they are paintings on canvas or walls, or objects. His artistic approach is thus in line with the historical movements of modernity, whose formalism he re-enacts by giving his paintings a vibratory power in the manner of sound or music, from which he draws inspiration. Stéphane Dafflon graduated from the École Cantonnale d'Art de Lausanne in 1999, where he is now a professor. His work has been the subject of monographic exhibitions at the Mamco in Geneva, the Institute of Contemporary Art in Copenhagen, the Villa Arson in Nice, and the Plateau in Paris.